Looking at the big picture, it appears that the Trump campaign knew exactly what they were doing when they allowed Trump to bizarrely cling to the idea that the election would be rigged against him. His pundits and supporters took the bait, speaking out about widespread voter fraud, to the degree that pre-election polling showed a substantial portion of the population had lost faith in the integrity of the election. This effort to pre-delegitimize the election prompted the Left, in turn, to deny the prevalence of voter fraud and, more importantly, to criticize Trump for claiming that he would not accept the results if he did not win. Hillary Clinton, during the debate, pointed to the importance of the peaceful transition of power as the cornerstone of preserving our democracy. Then, on November 8th, the world turned upside down. 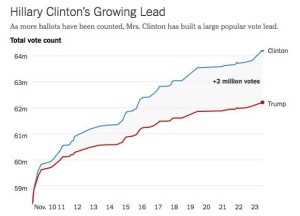 Despite pre-election polling that consistently showed a solid win for Hillary Clinton, America watched as swing states turned red, contradicting past voting trends, even exit polls. In the days that followed, not only did Clinton’s popular vote lead grow by a shocking margin, but anomalies in the election results were noted. Across the nation, citizens protested. Movements began to flip the Electoral College, recount the votes, and audit the election. The Clinton campaign and other high level Democrats remained silent. Why? Because the Trump campaign had forced them into a situation where they would have to contradict themselves. Accuse the opposition of that which you are guilty. This is a move straight from the Nazi playbook, and the Trump campaign pulled it off masterfully. Even down to Kellyanne Conway’s claim that there was a silent faction of Trump supporters that would sway the election for him. This statement creates a narrative that can explain the odd results just enough that people didn’t look any closer. This might have worked if it had not been for Wisconsin.

Wisconsin election results showed more votes for Trump than actual ballots. While Wisconsin officials have removed the extra votes and explained it as first, mathematical errors, then technological errors, it boosted efforts to recount the votes. Jill Stein began fundraising and filed for recount in Wisconsin. She hopes to recount in other states. The Clinton campaign has spoken out that they will be involved in the recount process. Had the Trump campaign not manipulated the situation, the Clinton campaign would have likely contested the results themselves. In an election that has been plagued by Russian electioneering and GOP gerrymandering, where people of power have jockeyed to place a man in power that they can puppeteer, there is no question that the election results should be examined and investigated. It is my hope that the state recounts result in a full audit of the election. With both the Right and the Left questioning the legitimacy of our election process, it is imperative that a full audit is conducted to restore faith in the system, regardless of the outcome. That said, it is my belief that the Trump campaign tampered with the vote. In the interest of the simplest answer often being the correct answer, consider this. For all the pre-election and exit polls to be wrong in the swing-states, millions of citizens would have had to actively lie about who they were going to vote for, and, then, who they actually voted for. Why? To what end? Alternatively, specific people could have been activated to either tamper with voting machines, or, more likely, tamper with the machines that count the ballots. I find the latter more plausible. If the Trump campaign truly believes that voter fraud is so widespread, then they should support recounts and audits, but they are speaking out against it. That is very telling, as well.

The American people and our democracy have been damaged this election. It is imperative that we stand up for ourselves. Please call the DOJ (202-353-1555) and request that they #AuditTheVote.